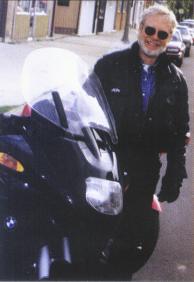 Twenty-nine years have elapsed since voiceover actor Harlan Hogan rode a motorcycle. And boy, did he make up for lost time.

This summer he decided to become a member of the exclusive Iron Butt Motorcycle Association, formed in Chicago by a group of hard core endurance riders, by proving his mettle on the pedal.

The only way to join the Association is to complete one of its sanctioned events. So on July 31 Hogan set out to prove he, too, has buns of steel by riding his bike a minimum of 1,000-plus miles in 24-hours or less. His reward would be a certificate and an Iron Butt license holder.

Hogan knew about the IBMA through a fascinating book he read about their rallies called "Against the Wind," by Ron Ayers. Where else to turn to learn more about it than the Internet? "I typed in Iron Butt on Yahoo and up came the Association's site. requirements for all the things they do were posted, so I said, 'why not try it?'

Since the test is about time and not speed, the rider may choose any route he wishes, as long as it's documented, and a reasonable goal. He can't go to Springfield 10 times, for example, Hogan points out.
His challenge was finding a place he could reach and return in 24 hours, thus eliminating his first idea of making Denver, an 1,800-mile round trip. He chose Sioux Falls, S.D., whizzing there - a distance of 1,131 miles - and back in a heart thumping 19 hours - all meticulously documented.

"I knew if I got to Madison, Wisconsin all right, without a lot of heavy traffic, I'd make the 1,000 miles," he says. But fatigue set in around 4:30 p.m. and Hogan stopped outside LaCrosse to see if he could restore some energy. For a pick-up, he ate a can of tuna for protein "and bang, I was fine."

A sheriff's police signed off on his odometer at 3:30 a.m. when he started his trip and a Lincolnshire, Illinois officer validated the mileage upon Hogan's return at 10:30 p.m. the same day. Every stop along the route was documented on a log. "I always got a computerized receipt with the time on it," he states.

The most important documentation was issued at an Amoco station in Sioux Falls, the turnaround point. Hogan cleverly withdrew a few bucks from an ATM machine for the computerized time automatically stamped on the receipt.

On the journey he wore leather pants and jacket, since leather is safer to wear than fabric. "It keeps the wind off and is therefore less fatiguing for the rider, minimizing the wind and sound." Naturally, he wore a helmet.

Back in 1965, when Hogan was first into motorcycles, a big Honda 305, he was a typical college kid of 19 who felt invincible and immortal
Naturally, wearing a helmet was out of the question. "Then I did a dance with a signpost and the signpost won," he says, painfully recalling the crash that broke the femur bone in his leg and required a metal rod in his leg for 25 years. Not until four years after the rod was removed did he dare get back on a motorcycle.

His interest in motorcycles was recycled when he became friendly with producer Jeff Burge, an ardent rider. In 1994, Hogan mused that biking would be fun again and bought a Triumph 900CC, "three times as big as the bike I owned years before." He sold the Triumph when the odometer hit the 12,000-mile mark and replaced it with a new BMW 81100 RT, which cost more than his first house. And which shows that Hogan has had a very prosperous career as a voiceover these past 22 years.

Fatigue was the toughest part of his Iron Butt journey, he notes, but the weather and scenery on the northwest trip was beautiful.

"As I left South Dakota returning to Chicago, I passed hundreds of motorcycles heading for the annual rally in Sturgis," he says. "So at every stop, someone inevitably came over and asked why I was going in the wrong direction."

After he arrived home, Hogan did not sleep for as long as one would expect after such an arduous, totally focused 1,131- mile ride. He spent the next day cleaning all the road goop off his BMW and then went out for a nice, little 350 mile spin.

When he told his friends he was making the trip, they naturally asked why? "I guess I just wanted that license plate holder," he says, referring to "the best $6 piece of plastic you've ever seen."