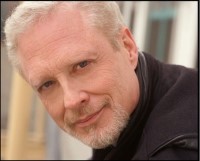 From Life cereal ("It's the cereal Mikey likes") to Raid pest control ("Kills bugs dead"), you've been buying what Harlan Hogan's been selling for 35 years.

Now this veteran of commercial voice-overs is asking you to buy him as the face and voice of the man upstairs.

In the locally shot independent film "Dimension" (released Sept. 18 on DVD), the 60-year-old North Barrington actor plays Ivan Crete, a seemingly divine entity who grants a qualified wish to the residents of a Chicago neighborhood: They can change exactly three inches about themselves.

The premise of the unrated project, which marks the big-screen debut of Chicago restaurateur-turned-auteur Matthew Scott Harris, sounds risque.

But Hogan insists -- in the crisp, avuncular intonations that have made him a disembodied staple of TV spots, documentaries and video games -- that this urban fairy tale has its mind somewhere other than the gutter.

"It has a really intriguing idea: If you changed one little thing, then everything could change.

"They're all given this opportunity. Some use it wisely, and some use it foolishly. I find that fascinating, because I've found that in life -- one little comment, one little question, and the world goes spinning off."

That happened to Hogan more than 40 years ago, when the Lansing, Ill., native and 1964 graduate of Thornton Fractional South High School was a freshman at Eureka College. His roommate mentioned he knew a disc jockey at a local radio station.
Already active in stage productions (Hogan later would earn a bachelor's in fine arts in theater from Illinois Wesleyan University), he expressed an interest in meeting the DJ.

"All of a sudden, I was doing theater AND radio," he says, "and (that) eventually led to voiceover work."

Starting small with corporate videos, he tried commercials in the early 1970s just as the era of the outsized announcer was ending.

"I came in with a 25-year-old voice, and people on the air all had big, deep, mellifluous voices," he recalls.

"(But) things had shifted. The boomers were starting to buy stuff, and they wanted somebody who sounded not like an announcer, (but) like somebody who might live next door. So it was wonderful timing, and a lot of dumb luck."

He's perhaps best known for his iconic Life cereal ad, which he recorded without ever seeing footage of the finicky Mikey. In the 1980s, he became the second voice of Raid (a woman replaced him in the '90s). He also voiced the "Because that little itch could be telling you something" for Head & Shoulders dandruff shampoo.

Hogan perhaps is most fond of his work for PBS ("This program is made possible by contributions ..."), which he recorded a few years back. Recent gigs include spots for Ford and Cracker Barrel.

Even as he's solidified his status as the Midwest's go-to golden-throat, he's diversified, authoring two successful voiceover guides and a related DVD.

But spending so many hours in his home studio, where he records 98 percent of his work, makes this married father of two yearn for the collaborative rush of film (his most widely seen role has been as a game show host in the 1981 drama "Four Friends," from "Bonnie and Clyde" director Arthur Penn).

Hogan was reminded of the rewards of on-camera emoting when he joined a film-festival audience for a screening of "Dimension."

"It was fascinating to sit there -- you could just tell that group of people was really involved with this story. What a kick for a guy who spends most of his time standing in a booth!"

In playing God, Hogan's apparently found his own private heaven.